Steffen Sontheimer: The Poker Master on the Lookout For Something Else 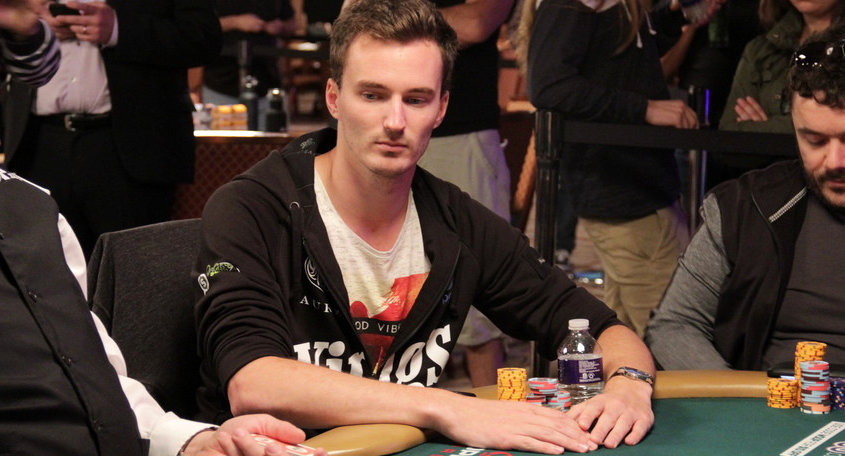 Steffen Sontheimer would make an excellent swimmer. The length. The grace. Or perhaps, a tennis player. Yeah, I can see him sending 100 mph serves down the middle of Centre Court at Wimbledon.

But he chose poker.

He’s bloody good at it.

In 2018, Sontheimer won the inaugural Poker Masters, and at the time, Daniel Negreanu told the world that Sontheimer was the best. The Americans gave him a purple jacket. It’s in his mother’s wardrobe next to her scarves, dresses and unloved bony looking hangers.

“I like trophies,” says Sontheimer, “I have a couple next to my working spot in Vienna. I like looking at them when I am working. It’s inspiring.”

The last trophy Sontheimer won was in November 2018 when he took down the $250,000 buy-in No-Limit Hold’em Super High Roller Championship at the partypoker Carribean Adventure in the Bahamas, but it wasn’t his first.

“When I was a kid I loved table tennis and running,” Sontheimer tells me. “I won a tournament in table tennis, and I remember that felt great. Athletics was different; we won medals and not trophies. But I did win an 8km race called The Midnight Run. It was my first running trophy, and I still have it around here somewhere.”

Here somewhere is in his mother’s house. Sontheimer lives in Vienna, Austria. If Kim Jong-un ever decided to use the gaff for a spot of nuclear war target practice, then the poker community would lose most of the best players.

Apart from the fact that every woman is beautiful, and that Ultravox once sang a song about the place, what makes Vienna so unique?

“When living in Europe, the two things you need to consider are whether poker is legal, and the tax situation,” says Sontheimer. “So, for the German players at least, it’s either England or Austria. I lived in Brighton, England, but decided after two years that it wasn’t for me. Some so many guys play online and live who live in Vienna. We have a Skype group with more than a hundred people. I believe Vienna got into one of those Greatest Cities to Live in the World lists. It’s a great place.”

Back to that $250,000 trophy, and it’s worth noting that, cup aside, the records book show that Sontheimer won $3,685,000, a tad more than he would have picked up for winning that table tennis tournament. I imagine it ranks as a career-high alongside his Poker Masters triumph.

“It’s doesn’t rank that highly,” says Sontheimer. “It was just one of those small field tournaments that I won. Obviously, there is this big number, and it felt great because only my friends had action. It was a tough tournament, and tough to sell to big investors. I like to sell to one or two parties to make things easier. This was the one where everyone had 1%, and it feels good to go to people and say ‘hey take your $30k, and you take your $30k’. It feels so much different than sending a weird amount of whatever portion of millions to a party I have never seen.

“The two years I grinded Supernova Elite, that was an accomplishment. I had to put a lot of effort in at that time. I was happy about the first tournament I ever won in Velden. Honestly, throughout the years it’s whenever I play on the stream and feel satisfied with my performance. This is where your image comes from, and how people rank you. I have run hot in these events, but I have made some good consistent decisions.

“Things are changing for me. During the Baha Mar event, when you look back at the action, you can see it. When I get it in AK v AQ versus Sean, I want it to hold, but there is no celebration moment – no sign of happiness. Scoring in soccer triggers a bigger feeling. It’s become a job. There are no more euphoric moments.”

I wonder if the world-renowned rational and logical German efficiency has blowtorched the shit out of the emotional side of the game.

“Definitely, and it’s a minus for every poker player,” says Sontheimer. “I have always had a goal, when it comes to my non-poker playing friends, excluding my close family, and my girlfriend, that I don’t let them see how the game affects me. Most of my poker friends will tell you that I am a whiny guy. It’s my way of getting things out. I write to one or two groups complaining about how bad I run, and then it’s gone. When my team scores a goal in soccer, yeah I am happy, but it’s not like it was ten years ago. Something within me has changed over the years.”

Some poker players want to leave a legacy; others want to win all the money, and for others, it’s a job where the goal is to play each hand as optimally as possible.

“There was a time when I loved the problem-solving aspect of poker,” says Sontheimer. “I don’t like studying the game as it is nowadays – looking at charts – that’s not my sport. I’m looking for other stuff that is interesting for me. I don’t think mid-term long-term about poker at all. I have no real goals.”

I wonder if financial security lessens the need to have clearly defined goals.

“It plays a role,” Sontheimer confirms. “Whatever I have earned so far – it’s buying me time. I don’t want to be the guy who is financially secure forever, who goes to the Maldives and enjoys life. I have bought myself time through the effort I have put into poker. I want to find stuff that I am as thrilled about as I was with poker in 2013.

“This is how I think about poker. Firstly, how should you play? You can use solvers. Secondly, what is the villain doing wrong? Thirdly, what’s the right exploit? ‘I know this guy has done that wrong and he doesn’t know about it, and I am exploiting that right now’. That still feels great. But poker got tougher and tougher, and now you have people sitting around trying to copy the same charts while waiting for someone who does it for fun to turn up. I don’t even feel like the people who play for fun are having fun. It’s a weird industry.

“When you think about the good old times it’s like having photos in your mind. Sure this was fun, and that was fun, but grinding a ten hour day, no one can say that is fun. The ARIA tournaments are different. They are very fast, often six-handed and you know most people. There is a crew of guys who live in Vegas who play them all of the time. If I was playing in all of these tournaments in Vienna, in the same place, with six of my friends, and we could all sit and have a laugh in German, then that would be great for me. But the overall grind…I don’t know.”

It sounds like ‘doing the work’ is a prerequisite of being a world-class poker player, but Sontheimer doesn’t find that part of the grind fulfilling, while at the same time realising that if he doesn’t ‘do the work’ he will fall down the pecking order quicker than a fireman down a greasy pole.

So is it time to find something else?

“I know how to do all the ‘solver stuff’, and I am good at it,” says Sontheimer. “The reason I started playing poker was that I loved sitting there with a pen and a paper thinking about problems. I was recently tidying my room, and I found some old papers where I was working on poker problems. I was good at that. Nowadays it’s way easier. Poker switched from studying maths to studying business. You have that book with a thousand pages and have to learn it by heart by next Monday for an exam. It’s more for hard workers now. I don’t want to sound arrogant, but for me, it’s way closer to work, and it’s ok to be working, but I prefer to do something that I love.

“I compare it to video games. I played Warcraft back in the day. I didn’t play well, but I loved it. I loved the strategy, and in poker, it wasn’t about money in the beginning. It was about making the next level. Moving up in levels – it was insane. I never touched the money, so it didn’t mean anything. It was a high score. Poker feels like a job – like I am trading time for money and time is so valuable. Finding out what it is that you want to do is freaking tough.”

Sticking with the gaming analogy, and it feels like Sontheimer has played the game for so long, and so well, that he’s reached the highest level.

There are no more levels.

The only way is down.

So is the poker grind worth the sacrifice of lost time?

“I had an interesting talk with Fedor {Holz} about this,” says Sontheimer. “He’s the type of person who finds an interest in everything. He has kind of retired for poker, but it’s still a good way for him to make money. It comes back to the 80/20 rule. If you have put in 20% of the volume, you get 80% of the money. He chooses wisely. He’s not the best in the world anymore, but giving up 80% of the work doesn’t decrease his level too much. Those fields he still plays in, there are a bunch of incredibly good players and a few businessmen. Being a little underdog against some of the regs – that’s fine, and he sees it that way, and that fits within the job aspect of it. Optimise that trade between time and money pretty much.”

So poker began as a hobby, turned into a vocation, became a career, and is now a job.

“I am looking.” Says Sontheimer. “I guess I am waiting for it to fall in my lap.”

Until his new vocation falls into his lap where does Sontheimer love to play poker?

“You have to look at the two sides of poker,” says Sontheimer. “The business side: how many recreational players are in the game. And then you have the enjoyment factor. Number one is Triton; they are the most enjoyable events. From the moment you arrive at the airport to the moment you leave – everything is done for you. And then on the business side, they provide so many recreational players, and everyone is always having a great time. ARIA is number two in that sense. The tournaments are fast. They have the best TD in Paul Campbell and have introduced “no rake” for people who start on time, and that produces a different atmosphere. The one minus is they give you the feeling they don’t give a shit about the Europeans.”

And how does poker make Sontheimer feel?

“Overall, poker provides me with a rollercoaster of feelings. I am pissed when I run bad, and happy when I run well.”

Well, he does like his running, and he has the trophy to prove it.