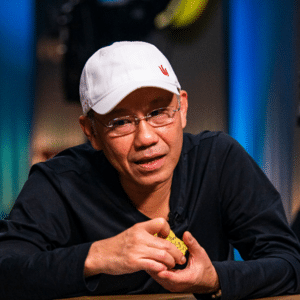 Paul Phua is a Malaysian-Chinese businessman and poker player with a long history of high-profile tournament wins. Although Paul only started playing Texas Hold ‘Em in his 40s, he has become one of the most exciting poker players in the world, regularly winning millions of dollars at tournaments.As of 2020, Paul has won almost $20 million dollars from various live tournaments around the globe.

Within the global poker community, Phua is perhaps best known for co-founding the Triton Series along with his business partner Richard Yong. He also worked with Steve Wynn in 2006 to establish the Wynn Macau, a luxury hotel and casino resort. In addition, Paul teamed up with some of the biggest names in poker to create Paul Phua Poker, a poker education website. With help from champions like Tom Dwan and Phil Ivey, Paul provides new and experienced poker players with plenty of tips and tricks so they can improve their performance. Accomplishments such as these have helped Paul develop a legendary reputation within the gambling world.

Wei Seng “Paul” Phua was born on April 29th of 1964 in Miri, Malaysia. Raised on the coast of Sarawak, Paul developed a passion for sports as a young child, and he became enamored with the English Premier League. During his teen years, he attended school in Singapore and worked a side job as a construction worker to help pay his tuition. As the years passed, Phua took his first steps towards the gambling industry when he became involved with sports betting. As he became more successful during his early years, Paul relocated to Macau, where more opportunities were waiting.

Paul’s business career took a major step forward when he connected with Richard Yong, who would later become his long-term business partner. Phua then worked as a VIP Junket operator in Macau, directing wealthy gamblers to the best casinos in the city. The casinos paid Paul a lucrative fee in return, and this quickly became a profitable business. Phua’s contribution to Macau’s gambling industry was so immense that when he finally stopped his junket tours, it was rumored that the city-state’s economy declined sharply.

Also, Paul became the ambassador for San Marino to Montenegro during the early 2000s and also helped Steve Wynn establish the Wynn Macau.

While his business ventures were successful, Paul Phua became interested in playing poker professionally after years of watching wealthy gamblers at poker tables throughout Macau. Due to his connections with casinos in this city, it was easy for Paul to sit alongside these gamblers and try poker for himself. He first started playing poker recreationally in the early 2010s, during a period when legends like Tom Dwan, Phil Ivey, Chau Giang, Patrik Antonius, and John Juanda were all moving from Vegas to Macau to play in high-stakes games. While playing with these veteran poker stars, Paul learned all the tricks and tips he needed to become a successful player in his own right.

Paul started strongly with a win at the Aspers 100K High Rollers event in London, winning $1.6 million. He continued to perform well throughout the next few years, steadily gaining valuable experience. In 2016, Paul’s business accomplishments and professional poker achievements both flourished. Although he had been performing well in various events over the previous few years, he gained recognition in 2016 after taking first place at The Monte Carlo One Drop Extravaganza, winning over $800,000. That year, he also teamed up with Richard Yong once again to create the Triton High Roller Series. 2019 was another successful year for Phua, and he won millions in prize money.

In 2016, Paul Phua launched Paul Phua Poker, a website that teaches poker players of all types how to excel. Both casual and serious players can improve their game with several helpful tips and tricks. The site also gives completely new players a full rundown on the basics of poker.

Paul’s website features helpful videos and interviews with some of the biggest poker stars in the world. These stars share their unique insights into poker, including personal strategies and secrets. There have been many well-known figures who have contributed to the site, including Tom Dwan, Dan Colman, Sam Trickett, and many others. Paul Phua Poker is also known for popularizing a new variation of Texas hold ‘em called “six-plus hold ‘em.”

Paul Phua was inspired to start this website to help aspiring poker players reach a high level of play. Paul created the site not just as a resource for high-stakes players, but also for those who simply enjoy playing poker casually and want to dive even deeper into this amazing hobby.

In 2019, Paul Phua won the GPA Industry Person of the Year Award. Phua won the award in recognition of his achievements in the poker world, namely the creation of the Triton Poker and his overall drive and determination as both a poker player and an entrepreneur. After winning this award, Paul stated on social media that it was an “honor and a privilege.”